Seeing latest development in robotics, I am expecting the world with full of robots much sooner than we thought few years ago. And the development we see is just publicly visible part of it. Can you imagine how far the stage of secret and private development already is? The latest news on Robotics brought my mind the idea of robot language, I call it Robotish.

Drones are a good example of the speed of technology entering our daily life. Although it has been used in military as UAV (Unmanned Aerial Vehicle) for many years, it was just 2-3 years ago when we first heard about drones used outside military world. Companies like Amazon Prime Air is working on delivery by drones, many health companies working on drones for remote medical services.

Today we can purchase a personal drone like Lily for $499 which is capable of tracking its owner and shooting photos and video footage of them. If you want to see what else drones can make, check this quadcopters demo by Raffaello D’Andrea at TEDGlobal robot lab. Algorithms are the core of what is going on. I am happy to see that good mathematicians and software engineers are finally appreciated by creating something amazes the world.

Robots built by Boston Dynamics are good examples to understand how fast robotics is developing. Their Cheetah is the fastest legged robot in the world, can run faster than 46km/hour which multiplies previous world record by 2. LS3 model has excellent stability and balance. Atlas as a humanoid robot that can walk on rough terrain and climb using hands and feet. Looking at these publicly presented models, I see that perfect war machines are about to come if not already developed.

Now, the technology is moving faster than ever. I see that a breakthrough happened at sensor and data processing technologies so that harmony of mechanics and software is capable enough to convert dreams into reality. I’m expecting next breakthrough at “learning” including robots teaching to and fixing each other. And it will be the time we need to think about future of human being.

Terminator movie is now just science, not fiction anymore! I’ll leave future of human being and security concerns to other discussions. The point is; it is inevitable. The technology will develop every day, not only for military or defense purposes and also for health, environmental and other human needs. Thus, instead of trying to delay technology development, it is better to make it right and controllable at the first time.

Why do we need robot language?

Facebook is being compared with countries. Bitcoin is introduced as new digital currency on the way to becoming a universal currency. What is missing? A universal language! Do we need it? I think so.

First of all, I’m not talking about a software language. Robots might have been programmed using different software languages. Simplifying these programming languages is just another topic but today I want to emphasize the need of a vocal robot language; with the alphabet, words, grammar, pronunciation… just like another national language.

We mainly need a vocal communication way to establish efficient interaction between human and robot, until a mind reading technology is available. Many robot designers are already working on mood and gesture recognition so that robot will understand if we are angry from our tone of voice, movements or just from our eyes. These will be great complementary to voice communication.

Considering that the voice is the primary communication channel between human and robot, let’s talk about efficiency we will get by a common robotic language. Because when we enhance the effectiveness of the interaction I believe the robot technology and user experience will develop much faster.

A common world language can save time and resources

Aren’t we already be able to give voice commands to robots?

Yes, we are. But how efficient is it?

Does that robot understand English, Russian or Spanish?

We built an enormous robot that knows (still “that”, soon maybe “who”) English. Can we ship it to Italy and expect everyone to be able to use it easily? Or in addition to further enhancing a robot why would we invest additional resources and time to make it understand different world languages? I know speech recognition technologies also developed a lot, but many national languages are still struggling to get 100% speech recognized due to grammar, pronunciation or other language-specific constraints.

Star Wars movie demonstrates the efficiency balance. We have C-3PO and R2-D2. C-3PO is built to be able to speak more than 6 million different languages, yet not much capable of doing anything else than protocol.

On the other hand, R2-D2 speaks the binary language which Luke Skywalker understands well. R2-D2 cannot understand as many languages as C-3PO does but capable of saving lives of heroes over and over with smartness and gadgets it has. Yes, we’ll still need C-3POs but isn’t it better to have more R2-D2s? 🙂

How the Robot language would be?

Most important, the Robot language should be easy to learn. In the end, humans will need to learn as well.

The new language should be fully speech recognizable. If we list all the difficulties in current languages that makes speech recognition difficult and cause ambiguity and focus on eliminating them, it would be a good start.

For example, it should be read as written which means every letter should sound same regardless of the word or location in the word. So that we will not need spelling or pronunciation lessons anymore, we just need to know the alphabet to read correctly and write whatever we hear. No more British English or American English discussions on how to read “either”, no more “is it too, two or to?” discussions 🙂

To improve speech recognition, it is also important to eliminate difficult sounds or letters from the language. The sounds like “ma”, “ta” are quite common in the world and most of the nations can make these sounds clearly. Meanwhile some sounds like “th”, “ch” are more difficult for many. In the new alphabet better to avoid letters and sounds that require difficult tongue or throat movements.

Alphabet will be shorter, but it will not be an issue to generate enough number of words to fill up a new language vocabulary.

Soundwise making a robotic language easy is straightforward, compared to making it semantically easy to understand. At this point, humans are still ahead of robots regarding fully understanding the semantic meaning of a phrase. It is because current world languages are not developed considering a machine will need to understand it.

With the new robotic world language, we now have a chance to eliminate semantic ambiguities. Why would a word have more than one meaning? Play! Play the music? Or let’s play a game? Making a 1-to-1 mapping between a word and meaning will improve semantic machine understanding significantly.

Similarly, why would 2 or more words mean the same thing? Can’t we pick one from “car” and “automobile”? 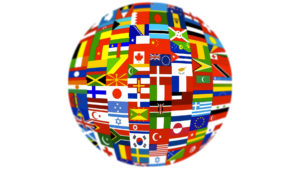 I think it would be fair if nations would have a chance to contribute to the new robot language proportional to the number of people speaking that nation’s language. As long as proposed words are okay to the rules, it will improve the learning curve and adaptation to the new language as everybody will find some familiar words and some part from their mother tongue.

Robot language the “Robotish” is also the world’s common language

If someone goes out and says “Let’s make a common world language and everybody starts speaking it”, it will probably be ignored. But if we start from a “need”, which is to interact efficiently with robots entering our daily lives it will make sense to step into learning a new language.

First, we will use the robotic language to communicate with robots.

Next, our children will be grown up by robo-nannies which will teach them robotic language maybe before the mother tongue. Then, we’ll see that it will become a language spoken by almost all of the world’s nations. 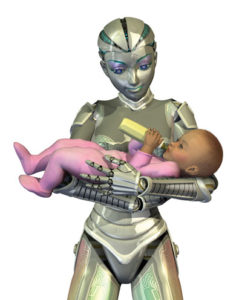 Soon it will more likely be a person faces with a robot than and English speaking human being. Therefore the “interaction with robots” would be the central motivation of the new world language.

For youth, the time to be invested in learning foreign languages can be diverted to creative and productive activities (anyway most of the teenagers hate foreign language lessons at high schools).

“Time” would be the biggest gain from a common language, practically robot language. We will gain speed and the world will develop faster!

This site uses Akismet to reduce spam. Learn how your comment data is processed.